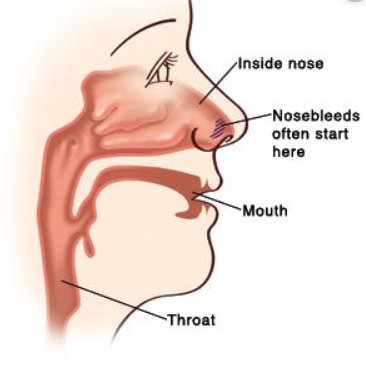 What can cause nosebleeds at night? What causes random nose bleeds? What do you do if your nose won’t stop bleeding? What does it mean when you get frequent nosebleeds? Get more insight on what causes nose bleed and how to stop nose bleeding.

Why Do I Keep Getting Nose Bleeds

Nosebleeds are common and may be scary but they do not indicate serious problem since they can be treated at home. Here are some of the common factors that may result in nose bleeding:

This condition result due to broken bone or cartilage in the nose. The breakage is mostly around the septum. The common causes of a broken nose include; walking into the walk, motor vehicle accident, falling down and getting a punch or kick in the face.

This is a situation that is common among children under age of 5years whereby they insert an object into the nostril. The pushing of objects into the nose may damage the delicate tissues in the nose and this would result in nose bleeding.

It is also known as hay fever and it is an allergic response to specific allergens such as pollen grains, dust mites, animal dander, cat saliva, and mold. The condition is marked by the following symptoms:

This is a condition that occurs when the level of blood increases to an unhealthy level. This condition is mostly associated with few or no symptoms.  The hypertension is grouped into two and each type has a different cause.

There is no exact cause of this type of high blood pressure but it is usually linked to the following factors such as genes, physical changes, and environmental factors.

It is said to be severe and it is usually caused by the following factors; kidney disease, obstructive sleep apnea, congenital heart defects, problems with your thyroid, side effects of medications, use of illegal drugs, alcohol abuse or chronic use, adrenal gland problems, and certain endocrine tumors.
Symptoms of high blood pressure include:

This is a viral infection that usually affects the upper respiratory tract like nose and throat. An individual with infection may experience a runny nose, clogged nose, sneezing, nosebleeds, and sore throat. It is recommended to consult specialists for treatment.

It can range from mild to severe, depending on the cause. The symptoms can sometimes include severe bleeding. It is caused by the following condition:

It is a condition that is said to be inherited or someone may be born with it. It can also occur as a result of the nose injury.  People with a deviated septum may experience the following symptoms:

This is a condition that is said to be a less common genetic disorder where the blood does not clot easily.  Therefore people with this disorder may experience prolonged or spontaneous bleeding even to small injuries especially on the nose.

This is a condition that is caused by the inadequate amount of protein known as factor X in the diet. The protein plays a major role in the blood clotting and therefore helps in stopping the bleeding. The condition is genetic but can also be caused by certain medications or another medical condition.

This is a type of the cancer of the blood and it is characterized by low clotting level after an injury.
Other common causes of nosebleeds include:

Nosebleeds among children can be provoking and frightening but it is a sign of some less serious health condition. The common causes of nose bleeding among children include:

There are also some medical conditions or intake of certain medicines that may cause the beginning of nose bleeding. Some of these conditions include:

Here are some steps on how to control nosebleeds among children:

Nose bleeding is something normal but there are some situations where it can become chronic. This chronic nose bleeding requires doctor intervention as it can cause more health problem. The common causes of the condition include:

Some nose bleeding may result from large vessels in the back of the nose. These nosebleeds can be dangerous. They may occur after an injury. This type of nosebleed is more common in the elderly and is often due to high blood pressure, atherosclerosis, daily aspirin use or bleeding disorders.
In case of frequent nosebleed, it can be due to leukemia. Nosebleeds can also be a sign of a blood clotting or blood vessel disorder, or a nasal tumor (both cancerous and non-cancerous).
Some of the top tips on how to prevent nose bleeding that is accompanied with blood clots:

Some of the possible causes of nosebleeds and headaches include:

When nosebleeds occur regularly during winter months, the typical cause is dry air due to recirculation through the heating element. This dries out the mucous membranes in the nose and causes cracking and bleeding through the nose.
The use of a humidifier can help with the nosebleed and also can alleviate headaches that can be caused by the same issue.

When a headache and/or nosebleed occur while a person also has pale skin, heart palpitations, fatigue and shortness of breath, the culprit may be anemia or an insufficient amount of red blood cells. This can cause both headaches and nosebleeds frequently.

Particularly for the elderly and those with high blood pressure, an accident where a head injury occurs can result in a headache and/or nosebleed. Damage to blood vessels in the rear part of the nose can also cause a nosebleed.
Headaches that get progressively worse after a head injury can be a sign of significant issues, and a trip to the doctor should be made immediately.

A headache can occur when someone has a sinus infection, and that is traced back simply to the discomfort of having the infection. However, when people use too many decongestants that can cause the nose to be irritated and bleed.

When a person is afflicted with an episode of a migraine, the pain can cause a rise in blood pressure, and this, in turn, can result in a headache and nosebleed. The capillaries in the nose can also widen and result in a nosebleed.

This typically causes nosebleeds when snorting the drug and the headaches occur when the high is wearing off.

Can Stress Cause Nose Bleeds

Mental stress releases some unpleasant emotions like fear, sadness or anxiety, however, the damaging effect may not be associated with emotional health only, it also has a significant effect on the physical health.
The human brain behaves in a certain way when under constant stress. Mainly, it causes some changes in the functioning of the body, in an attempt to cope with the increasing level of strain when you are stressed up.
The pressure within the blood vessel increases and the delicate arteries in the nasal cavity will mostly be the first to respond to this change in pressure, which ultimately means nose bleeding.

What Causes Sudden Nosebleeds in Adults?

Some of the common causes of nosebleeds among adults include:

A blunt trauma of the nose is one of the most common causes of nosebleed identified in medical institutions. The trauma often results in nose bleeding because of the leakage of blood from weakened and injured blood vessels of the nose.

The drying of the nasal membranes makes an individual more susceptible to infections and nose bleeding. In fact, it is actually the most common of all nose bleed causes.
It results from a lack of lubrication in the nasal membrane. Lack of lubrication causes crusting and makes it easy for nasal blood vessels to break.
Since dry air results to a cracking in the lining of the nose, it consequently leads to the development of nosebleeds or blood when blowing nose.

High blood pressure increases the chance of developing many serious health problems like stroke or heart attack. When left unattended, it can lead to breakage of various blood vessels including those of the nose, thus, bleeding occurs.

The common cold is one of the many reasons for nosebleeds for it causes irritation of the nose that can result in the rapture of nasal blood vessels.
When having common colds, irritation can be reduced by avoiding the picking of the nose or any disturbances towards the nose.

The condition is not harmful, but frequent ear barotrauma can result in nose bleeding making it one of many possible causes of bloody nose inception.

Liver disease, kidney disease, chronic alcohol consumption, and many other medical conditions can impair the ability of the body to regulate blood properly.
When the condition complicates, the onset of frequent nosebleeds (sometimes excessive nose bleeds is possible) may take place.

Allergic responses that result in inflammation could cause nosebleeds. Inflammation, especially those of the mucous membranes of the nose, resulting in irritation of the nose; breaking several blood vessels which eventually leads to blood loss through the nose.

How to Stop Nose Bleeding

Here are some of the steps that help to stop nosebleeds:

This is probably the easiest treatment and is often effective in minor nosebleeds that result from dry air and minor causes. While your first inclination may be to tilt your head back, this can actually cause the blood to run back into the throat and sinuses which can cause gagging. Instead, lean over and slightly tilt your head forward.

Apply an ice pack or ice cubes to the nose and cheeks. The cold will restrict the blood vessels, which can help to slow and stop the flow of blood. However, be sure that the ice is wrapped in paper towels or a cloth. Do not apply ice directly to the skin.

Nosebleeds may tend to occur more frequently in children. Crying increases blood flow to the face and can make a nosebleed worse.

Humidifiers can be helpful, as can avoid excessive scratching and blowing of the nose. If nosebleeds persist after you’ve taken preventive measures, seek the advice of a medical professional.
FURTHER REFERENCES